Temple Sholom in Broomall is honored to house a Holocaust Torah Scroll, MST1243, in partnership with the Memorial scrolls trust. We see it as a mitzvah and an honor to house this torah in our community. It will serve as a teaching tool and a sacred reminder of the 6 million of our people who perished and the countless others, the communities wiped off the map. For our kids, this is now ancient history, which is why we have worked to try our best to bring holocaust survivors in each year to speak, to travel to the holocaust museum. We have to remember, so that we can prevent such a tragedy.  While never again is a deeply held value, we also felt that we are doing a mitzvah of bringing sacred life to a torah scroll that has been dormant for decades…it will sit in our ark, be read from our bimah and it will again witness weddings, namings, children and families, community. If this Torah could talk I can’t imagine the joy and tears it would shed. We will remember those who perished by celebrating our tradition with pride!

Where is the scroll from?

The 1,564 sacred Scrolls which came to Westminster Synagogue on February 7, 1964, had been gathered together in Prague, from the devastated synagogues of Bohemia and Moravia, by the Nazi official in charge of the Czech “Protectorate.” Much more synagogue booty – books, pictures, embroidered vestments, and ceremonial objects of silver and gold – were similarly collected by the Nazis, and many of these articles are now in the State Jewish Museum in Prague. The Scrolls themselves lay piled in the disused Michle Synagogue for more than 20 years.

At the end of the war the museum came under the control of the Czech state authorities. It was maintained conscientiously as a memorial to the vanished communities, but the Sifrei Torah (Scrolls of the Law) could not be effectively displayed as museum exhibits. It was realized that they would eventually deteriorate if they remained rolled up and unused.

In 1963, a prominent British art dealer was able to arrange for the scrolls to be acquired by Ralph Yablon, a London businessman and philanthropist, on the understanding that they would be entrusted to Westminster Synagogue. After a preliminary examination in Prague by Chimen Abramsky (later professor of Hebrew and Jewish Studies at the University of London), the scrolls were carefully packed and shipped to London.

On February 7, 1964, 1,564 Sifrei Torah – a consignment which must have been unprecedented in Jewish history – arrived at Westminster Synagogue. There they were housed in numbered cradles in specially constructed racks while the work of inspection and classification was undertaken. A committee had been formed to take responsibility for the scrolls, and the formidable task of administering the work of repair and distribution was undertaken by Ruth Shaffer, daughter of the Yiddish novelist and dramatist Sholem Asch.

The completion of the preliminary study and classification was marked, in June 1965, by a solemn assembly at Westminster Synagogue. 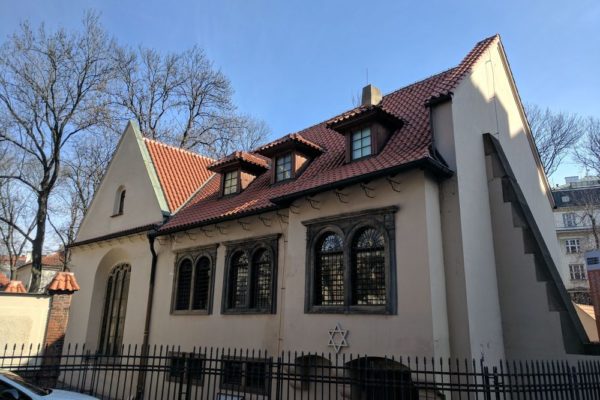 Pinkas Synagogue is the second oldest building in the Prague ghetto. It began in 1535 as a private house of prayer. In the 17th century, the synagogue expanded to include a women’s gallery and was used for worship by the local congregation. Today its importance lies in its role as a memorial to the 80,000 victims of the Holocaust from Bohemia and Moravia, whose names are hand-painted on the walls.